Editor’s Note: China is divided into as many culinary regions as there are different ethnic groups. Its geographical diversity and kaleidoscopic cultural profiles contribute to the unending banquet of flavors.

Hot weather is officially here, with the summer solstice just a few days away. All over China, the weather map takes on various shades of red as the country swelters.

While the north is dry and hot, the southern regions are baking in humid heat known as sauna weather. That is why herbal teas are always an important part of summer.

These teas are infused with Chinese herbs and may taste slightly sweet or intensely bitter, depending on what they were prescribed for. But for as long as we can remember, herbal teas have been popular in the south. “Cooling herbal tea” or liangcha is so much a part of Chinese life that it has been listed as a National Intangible Cultural Heritage. 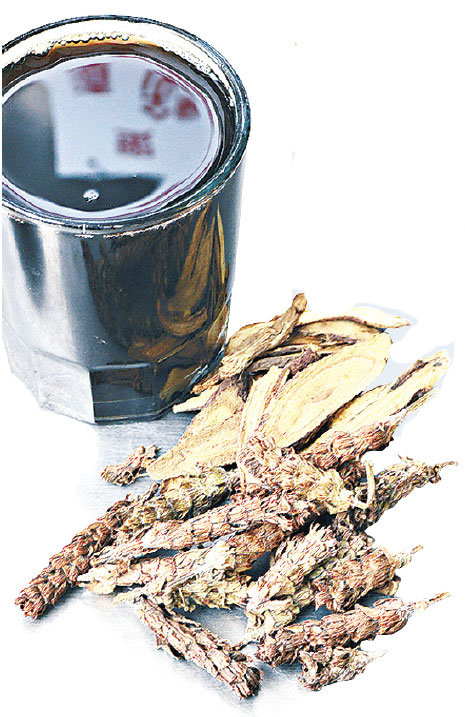 Southern Chinese people, in particular, would not think of passing through summer without their daily doses of cooling tea. And as the urban diaspora spreads, even major cities in the north are now enjoying the benefits of these teas-a result of improved marketing, packaging and logistics.

When Sichuan hotpot migrated north, it took along the Cantonese cooling tea, and it became all the rage to enjoy the numbing heat of the prickly ash peppercorns while imbibing huge quantities of liangcha in cans.

This practice is actually frowned upon by traditionalists. Liangcha cannot be treated as a soft drink. Every glass or bowl has its designated dosage and benefits.


Carefully prepared concoctions are sold in potbellied copper pots along the coastal stretch of southern China, from Macao and HongKong to Guangzhou, Beihai, Zhanjiang and Hainan Island. These are specialty shops with brews that have stood the test of time and generations.

For example, the country’s most popular canned herbal tea – in a red can – comes from a Cantonese recipe that is a couple of hundred years old. Every herbal shop in Guangdong or Guangxi has its own signature brew – including Baozhilin, the herbal shop owned by legendary martial arts master Huang Feihung.

These herbal tea shops are the result of both geographical and cultural serendipity. They are all in an area known as Lingnan, south of the Ling Mountains. It’s a naturally humid valley that’s a botanical treasure trove of rare plants and herbs – a fact long known by their homeopathy founders.

They collected and dried the natural ingredients and brewed a vast variety of cooling teas to combat the summer heat. Most of these cooling infusions are made from dried flowers, leaves and roots, all harvested from the region.

Some ingredients were rare in the past but were later cultivated – including ajuga, the bugleweed known in Chinese as xiakucao. Then there is the fuzzy silver-leafed baizicao, or Antiotrema dunnianum.

These two herbs are common summer coolers and are easily prepared at home, sweetened with rock sugar or honey.

In recent years, the herbal infusions have even been commercially distilled and are sold in packets of easily dissolved crystals, just like instant coffee.

Another famous infusion is wuhuacha, the five-flowers tea, made from honeysuckle, chrysanthemum, Chinese locust, red cotton tree flowers and the kudzu flower.

In my childhood, I remember my Cantonese village grandmother feeding me all sorts of evil concoctions. A more pleasant tasting one was the baizicao tea, which even smelled faintly floral and was supposed to chase away the summer vapors. Growing up in Singapore meant we drank it all year round.

The herbal brew that sent me hiding under the staircase was an intensely bitter one made from the tiny dried flower buds of Cleistocalyx operculatus. It had a beautiful Chinese name, shuiwenghua, which roughly translates to “flowers of the water scholar”.

Its literary beauty was totally lost on me. It was forcibly fed to me whenever I showed signs of fever or sunstroke, which was often, and I never failed to break into a sweat after drinking the brew. Perhaps it was sheer terror.


Similar stories are told by my friends.

One was forced to drink a series of bitter concoctions after she was diagnosed with polio and Western doctors told her mother there was nothing they could do.

Her determined mother consulted a Chinese physician in Chinatown who prescribed a routine of herbal brews. They worked. We never knew she had polio until she told us much later.

Miraculous cures aside, most herbal teas are roughly divided into four categories, according to their effectiveness.

In the first group are the antitoxin teas, which clear accumulated heat in the body and are suitable for those who are easily irritated. The main ingredients include such things as honeysuckle, chrysanthemum and wild magnolia.

The second group of teas is for those susceptible to summer colds and sniffles. The signature ingredient is banlangun, the indigo root, which was touted as the miracle herb during the SARS epidemic.

Another group of teas is more for autumn consumption when the weather becomes very dry and coughs and throat irritations are common. They make use of pear leaves, snow fungus and other soothing ingredients.

Finally come the teas that clear “wet heat”, a condition that arises from too much spicy and fried food, and from fruits such as mangoes and litchi that bring on halitosis. These teas use honeysuckle, chrysanthemum and desert mushrooms to best effect.

There are some things modern Western science is still discovering about Chinese herbal teas. To the Chinese, however, the proof is already in the drink.

This article was published by Chinadaily.com.cn.  Click here to read the original.

What Is Boba And Why Is It So Popular?